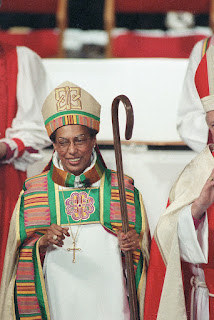 Those of us blessed to be at the ordination and consecration of Barbara Harris as a bishop in 1989 were lifted out of our seats as this gospel hymn began and the procession leading Barbara entered the room where 8,000 of us had gathered to participate in history.  That I was able to be there remains one of the great moments of my life.

On February 11, 1989 I was yet to be ordained and I had no notion whatsoever what a personal part of my life Barbara Harris would come to be.  I knew her from her writing in The Witness, of which she was the editor for many years, writing a column every issue called A luta continua, “the struggle continues.”  As a young Episcopalian and then as a seminarian, the columns had helped form my own commitment to social justice as an integral part of the Gospel.

It was 1997 before I met Bishop Harris face to face when I began to represent Integrity on The Consultation, the “collective” of peace and justice ministries working with The Episcopal Church. At that time the meetings of The Consultation were held in Boston, and Bishop Harris was in attendance for at least some of each meeting.

I met there the woman who so many came to meet: the passionate advocate for those oppressed by racism, poverty, sexism, and homophobia; the lover of the Gospel who was clear about her own relationship with Jesus and the clarity of his teachings; the pragmatic politician who understood how things got done in the church even as she was committed to pushing it to an ever new place.
Bishop Barbara came to be a mentor, as she was to so many, at once deeply encouraging and clear in her challenging us to take up the cross and follow the Lord she loved.  Sometimes her challenges had real bite!  But they always also had love.

One moment I remember so well was in 2003 at the General Convention in Minneapolis when the Convention had just given its consent to the consecration of Gene Robinson.  I was President of Integrity at the time, and was planning a service of thanksgiving.  I asked Bishop Harris to preach and she turned me down.  I asked then for her advice in asking another bishop who she thought would rise to the occasion.  “No,” she said, “you do it.”  I confessed that I wasn’t sure I had it in me.  “It’s in there,” she said, “let it out.”  I asked her advice on content.  “The Gospel,” was her only reply.
I did preach at that service and, uncharacteristically, used neither a manuscript nor notes.  I preached in a style and tone I had never done before. 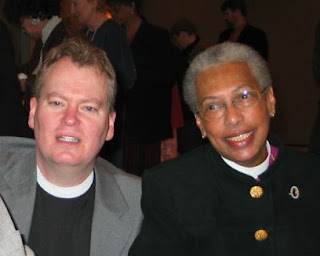 After her retirement in 2002, Bishop Barbara came to the Diocese of Washington where I was serving to assist Bishop John Chane, who was the new Bishop of Washington.  In the couple years she was there my parish—St. George’s, Glenn Dale—never received her for a visitation, but she did come to John and my relationship blessing service in 2004.  Later in 2004, after our move to St. Luke & St. Simon’s in Rochester, New York, she preached at my installation.

When I heard of her death, immediately thought, A luta continua, and thought back to the day of her consecration and the words of that great hymn.  There are many versions of that hymn, but the unique lines from the version sung by Mahalia Jackson read like a sermon from Barbara Harris.

In that great getting’ up morning, fare thee well, fare thee well
Let me tell you ‘bout the coming of the judgment,
There’s a better day a-coming,
God’s goin’ up and speak to Gabriel,
Pick up your silver trumpet,
Blow your trumpet Gabriel,
Lord, how loud should I blow it?
Oh, to wake the children sleepin’.

Posted by The Rev Michael W Hopkins at 2:10 PM