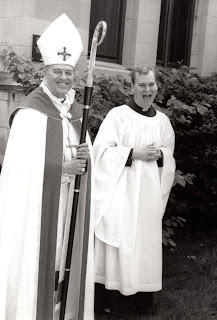 The first time I walked into the office of Bishop James Winchester Montgomery I was anxious.  I was seeking to re-enter the ordination process after leaving it in another diocese. The leaving had been unpleasant, and I wasn’t sure if anyone would let me back in.  I had received, however, many assurances that Bishop Montgomery would be welcoming.

I hadn’t taken any chances.  I asked several clergy from the Diocese of Chicago (I think it was five) to write me a letter of introduction.  It was the first thing he said to me:  “Well you certainly have some fans among my clergy.” I wasn’t sure if he thought that was a good thing or a bad thing, but then came that famous Jim Montgomery smile, and I knew that all would be well.

Bishop Montgomery died on Wednesday, October 23, 2019, in the 99th year of his life and the 58th of his consecration as a bishop.  I am sad, but I am also grateful, for this man came into my life as my bishop and pastor precisely when I needed both.

It took more time for “all to be well,” you see.  My first attempt to re-enter the process came up with a “no” from the Commission on Ministry of the Diocese of Chicago.  I remember the day he told me.  He was visiting All Saints’ Church, Western Springs where I was doing field work as part of my middler year of seminary.  He had taken a chance on me and let me re-enter seminary even though I was not officially in the process yet.  I was devastated to have been told “no,” and he was a pastor to me.  Among words of comfort, he told me that I would get a second chance in a year.

By the time I was ready to be ordained in 1989, Bishop Jim had retired, but his presence at that ordination filled me with joy.

There is a book by the late Robert Hovda called Strong, Loving, and Wise: Presiding in Liturgy.  It is a book I learned much from, but even more from a man who exemplified each of those words not only in his presiding at liturgy but in his exercising his office as a bishop.  He was at liturgy always present to the moment, clearly devoted to and loving of what he was doing.  You knew this was something he took as a privilege and a responsibility, that he believed the words he said, not in an arrogant way, but a confident and humble one.

I am grateful beyond words for having known him and for the influence he has been on my life both as priest and as child of God.

The picture is a favorite of mine. I was Bishop Montgomery's chaplain at the Seabury-Western Seminary graduation in 1987 (at the end of my middler year). Waiting for the service to begin, we are clearly reacting to something funny that has just happened.  There's that Jim Montgomery smile!
Posted by The Rev Michael W Hopkins at 3:44 PM